This new biography of Crystal Eastman, said to be the first, shows that her memorable role in the Pittsburgh Survey, at the conclusion of which she published Work-Accidents and the Law (1910), was just the start of an amazing professional career.

After her work in Pittsburgh, interviewing the widows of hundreds of workers fatally injured in the city’s mines, mills, and railroads; and studying the results of wrongful death suits at the courthouse, she was appointed to the New York commission which drafted one of the country’s first workers’ compensation laws.  Thereafter, she was an activist in – and often a journalist reporting on – various egalitarian and socialist causes, the suffragist movement, founding what is now the ACLU, and in the anti-war efforts that preceded World War I.  Eastman also teamed with her equally famous brother Max to own and operate the radical socialist magazine, The Liberator.

The variety of Eastman’s activist efforts after she left Pittsburgh for New York, and later England, is dizzying.  Much of the book is devoted to her role as a vigorous leader in the nascent feminist movement.  Here one learns of an interesting tension within that movement, nationally and internationally, over whether women should embrace legislation which protected women in the workplace, or whether they should reject such measures in the name of complete equality with men.  “Equalitarian” feminists like Eastman argued for industrial rights and freedom from laws which, though solicitous of women’s interests, had their genesis in the “age-old patriarchal idea of female protection.”  Eastman, who drafted an equal rights amendment to the U.S. Constitution, was, along with her colleagues, not “opposed to laws improving … labor conditions; they merely claimed they should apply to men and women alike.” 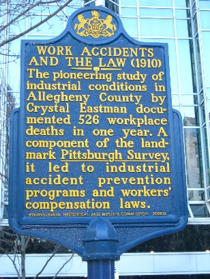 A long  preface to this excellent book is the chapter, “Searching for Crystal Eastman.”  Here, the author ponders why Eastman is not better remembered.  With this biography, the case has been made that she should indeed be more prominent in our understanding of a variety of early progressive movements.  It is also pleasing to learn that Eastman, fresh out of law school and without a job, gained early fame and respect for her socio-legal study which produced Work-Accidents and the Law.

While Eastman may not be as well remembered as she should, it’s worthy to note that the national bar association, The College of Workers’ Compensation Lawyers, honored her as a “Legend” of the field in 2019.  And, of course, in Pittsburgh she is remembered with a state historical marker in downtown’s Market Square, commemorating her famous study, her renowned book, and her contributions to raising awareness of the crisis of uncompensated work deaths.  That raised awareness, of course, was a major contributing factor to the enactment of workers’ compensation laws in Pennsylvania and around the country.