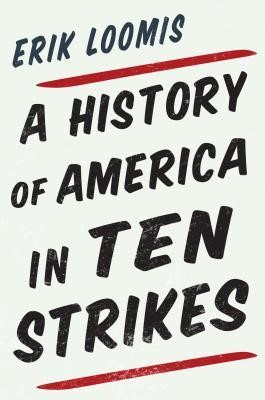 A History of America In Ten Strikes

Lawyers, particularly those whose practices touch on employment relationships, will be more perceptive of the role of organized labor in directing the history of our country than will be the general reader.  A History of America In Ten Strikes makes the case that labor’s ultimate weapon was a powerful engine in the manufacture of the American Story.

The ten strikes featured reflect the progressing demands of American workers. In 1834 the Mill Girls of Lowell (Massachusetts) strike against the textile manufacturers lowered the work week to sixty-nine hours. Though unorganized, enslaved workers, during the Civil War,  took their futures in their own hands with rolling strikes against their masters.  By the Gilded Age, strikes fought for an eight-hour-day (presumably down from 69 hours per week).  A milestone in labor relations occurred during the anthracite coal strike, during which President Theodore Roosevelt intervened to attempt to bring labor peace – in contrast to the traditional government support of management.  A more radical step was the Bread and Roses Strike by textile workers in Lawrence, Massachusetts, organized by the Wobblies (Industrial Workers of the World, or IWW) in 1912 to protest reduction of daily earnings in response to a legislatively-mandated reduction in working hours. The Flint Sit-Down Strike against GM in 1936 and 1937 represented a further shift in government involvement as the New Deal encouraged labor unions.

The Oakland General Strike of 1946 was broader than previous employer or industry-wide stoppages and arose from pent-up demand after the austerity of World War II.  The 1972 Lordstown, Ohio Strike against GM shed light on a changing industrial landscape, new social demands of union rank and file, and the chasm opening between the union leaders and their membership.  The Air Traffic Controllers Strike of 1981 highlighted the rise of public sector unions and, finally, the rise of the Service Employees International Union reflected the struggle of low wage earners.

The agenda of this book is clearly to promote the interests of workers by establishing that progress came from the workers’ struggle rather than a rising tide that lifted all boats.  Regardless of one’s acceptance or rejection of this theme, it does encourage readers to stop and think where their forebearers stood in relation to the events chronicled in this tome.

Author Erik Loomis uses each strike as a core of a chapter describing a phase in the evolution of labor-management relations and the broader socio-economic environment.  He examines the competing forces within labor between those striving for tangible improvements in the lives of their members and those seeking to force fundamental social change.

The author plays his cards early when he asserts, “In Donald Trump, we face the most racist and misogynistic president in a century, who has demonstrated his utter contempt for the Constitution and the values that have made the United States the best it can be, even if it was never great for many of its citizens.”*  While criticism of Trump is fair, such intemperate language is a betrayal of a biased narrative.

I become suspicious when I, without the aid of research assistance, catch historical errors.  On page 42 we read that “Tennessean Andrew Johnson ascended to the Oval Office,” an office that was not constructed until the administration of William Howard Taft, over 40 years after Johnson left office.  I wonder how many other “facts” are not so.

History is made not only by politicians and generals but also by cultural, religious, scientific, and business (of which labor history is a part) movements, and leaders. Those who see in American history a saga of injustice and oppression will find justification in this book.  Those who think otherwise would benefit from taking a look from the other side for a more well-rounded appreciation of the American Pageant.