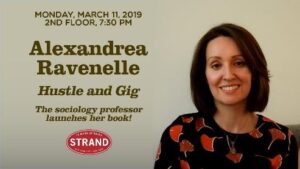 In this book, the author, a sociologist, undertakes a critical examination of work in the gig economy. She does so, principally, through personal interviews with workers in four different types of gig work: drivers for Uber and Lyft; “Taskers” for TaskRabbit; chefs working for the now-defunct Kitchensurfing; and Airbnb entrepreneurs.  While many books exist addressing the issue, Ravenelle’s is the first that I have read that explores not just Uber and Lyft but these other enterprises as well.

An overriding theme of Ravenelle’s discussion is that the gig economy is, for the vast majority of its workers, not some utopian form of work, where individuals empower themselves to become entrepreneurs, free of onerous control by bosses, and secure a position to dictate their own destiny. To the contrary, the author posits that a “historical review of labor shows that for all its focus on technology, the sharing economy is truly a throwback to an earlier age.”

Underlying the author’s critique is the phenomenon that many workers in the gig economy, while purporting to have freedom, have lost many of the benefits achieved through the labor movement and other progressive reforms over the years, such as unemployment and workers’ compensation.

Hustle & Gig is, as to workers’ compensation, a remarkable book. Among the many critiques of the gig economy, none that I know of devote as much space to the lack of work injury protection that attends gig economy jobs.

The author’s approach is to give examples (like the above), through her interviews, of workers who are injured by or develop impairment from their work. She does not, notably, identify examples of specific claims which (for better or worse) made it into the system, or cite any statistics to illustrate how many injuries and deaths are in fact sustained by workers laboring for gig enterprises. Still, she has no problem encountering anecdotes. For example, a worker named David, laboring through Kitchensurfing, enters a client’s house carrying a load of food, and twists his back. Ultimately, he has an MRI, loses time from work, and is told he needs surgery. The predictable analysis follows: “As independent contractors, Kitchensurfing workers are not covered by workers’ compensation. They also do not qualify for employer-sponsored disability compensation. ‘We’re just the hired help. We’re freelancers,’ David said. ‘I think it’d be easier if it happened on the job, to get some sort of workers’ comp.’”

The lack of any coverage is especially of relevance because, according to the author, many workers for TaskRabbit, in particular, are assigned to potentially hazardous work.  Notably, one marketing approach of TaskRabbit is to persuade customers that it is “possible … to outsource unpleasant work to others.” While the company is said to emphasize worker safety, and workers are told to leave tasks “where they feel physically uncomfortable,” in reality most workers who are financially dependent on their labor “can’t really afford to walk away from the task. By the time a worker arrives at a location, he’s likely spent at least an hour on travelling and on communicating with the client ….”

And, of course, the dangers attendant to allowing strangers into one’s car for rides (the daily labor of the Uber and Lyft driver) are obvious. In one memorable account, a driver is essentially hijacked by drug-dealers into a multiple-stop delivery adventure from which he was too terrified to effect an escape.

None of the author’s Uber and Lyft interviewees had been physically assaulted; however, several drivers referenced “actively trying to avoid driving on weekend nights in order to avoid dealing with drunk passengers.” Ravenelle points out another hazard: it is hard for drivers always to get all their “rides in” and at once try to find a place to go to the bathroom. The author notes that taxi and other drivers have long been identified as being subject to the development of obesity and joint issues. Such issues “are in addition to what medical professionals have dubbed ‘taxicab syndrome,’ the increased voiding dysfunction, infertility, urolithiasis, bladder cancer, and urinary infections found among professional drivers compared to the general driving public.  These health issues are thought to arise from lack of ready access to bathrooms, a well-documented difficulty for most cabbies, but a challenge that may be especially salient for app-based drivers.”

In her final chapter, the author reviews the issue of principal concern to the workers’ compensation lawyer or judge: the pivotal criterion of control, and the assertion of the gig economy enterprises that they simply do not control the work of drivers, Taskers, and other such individuals. As they do not exert control over such workers, they are independent contractors and not employees. The author correctly identifies why the gig economy enterprises desire this arrangement: “For one, the cost savings from classifying a worker as an independent contractor can be considerable: After factoring in unemployment insurance, workers’ compensation premiums, Social Security, and Medicare contributions, health insurance, and any additional benefits, the savings can total around 30 percent…. Companies that outsource workplace risk to their workers are able to offer much lower prices than companies that commit to paying an actual wage.”

Hustle & Gig is an excellent book which identifies the key social and legal issues surrounding labor in the gig economy, including the workers’ compensation issues with which we deal. The book is no polemic, but by the end it is clear that the author believes that the gig enterprises are undertaking an epic con job when they promote gig work as leading to freedom and entrepreneurialism on the part of workers. Indeed, she compellingly portrays them as entities injurious to the long-term public good.

1. Gig work as a step backward for most workers. “Yet for all of its app-enabled modernity, the gig economy resembles the early industrial age, where workers worked long hours in a piecemeal system, workplace safety was non-existent, and there were few options for redress.  Despite its focus on emerging technology – apps, smartphones, contactless payment systems, and review systems – the sharing economy is truly a movement forward to the past. Workers find themselves outside even the most basic workplace protections regarding discrimination and sexual harassment, the right to unionize, and even the right to redress for workplace injuries. The sharing economy is upending generations of workplace protections in the name of disruption and returning to a time when worker exploitation was the norm.”

2. Gig economy enterprises as retaining control: “The gig economy promises flexibility and more free time, yet workers are increasingly tethered to work because of the on-demand nature of the work. …[W]hile the workers are ‘self-employed’ contractors and don’t answer to bosses, they remain under constant observation through a technological panopticon. But unlike Bentham’s original prison model, where prisoners cannot see the watchers and never know when they are being watched, in the gig economy, everything can be collected and viewed at any point.Chat logs in Task Rabbit, emails in Airbnb, travel locations for Uber – all of this is collected and can be viewed by platform administrators.”

3. Gig economy enterprises as avoiding social responsibilities: “[T]he gig economy’s lack of responsibility for workers results in an effective destruction of Occupational Safety and Health Administration protections and workers’ compensation as workers clean ponds and remove construction dust with their bare hands, get bitten by dogs, and experience on-the-job injuries for which they have no financial recourse….”

“In recent years, the number of workers classified as independent contractors has grown steadily as employers seek to avoid social responsibility, including workers’ compensation, overtime, and disability accommodations.… A 2015 [OSHA] report suggests that temporary workers and independent contractors also receive less training and are more likely to be injured on the job as a result.”