by David B. Torrey, WCJ
Pennsylvania Department of Labor & Industry
Prepared in February 2022 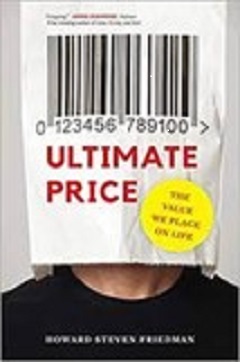 In this book, a statistician and health economist explains and critiques how governments, the courts, corporations, and even individuals place dollar amounts on the value of life.  He examines, among other things, the 9/11 Fund established after the 2001 terrorist attacks and famously administered by attorney Kenneth Feinberg. He also discusses the proofs surrounding, and calculations made, in the realm of wrongful death action damages. Yet another discussion surrounds how administrative agencies use cost-benefit analysis in coming up with regulations –an undertaking which often includes utilization of the “Value of a Statistical Life.”

The author, as one reviewer has pointed out, “organizes much of his perception, and much of his critique, by reference to large and abstract ideals: equal dignity, equal protection, human rights, and nondiscrimination.”  Friedman, through that prism, persistently finds much fault and inequity in how the value of life is calculated.  This persistence, at times, causes the critique to be grating.

Still, this book is one of those texts that analyzes for the reader a variety of related topics that most of us take for granted and/or rarely afford a critical analysis.  I learned something new and valuable on almost every page.

Friedman is critical of the common law principle which holds that judges and juries are not to award damages for the “value of life.”  In his view, further, it is inappropriate to award more enhanced damages to survivors, or to an estate, in cases where the deceased is a young individual, as opposed to one who is old.  This is typically the result, of course, because wrongful death damages take into account the potential for future lost earnings.

The author does not, notably, mention workers’ compensation in his book but, presumably, he would be disapproving of laws establishing work-related death benefit rates based upon the claimant’s average earnings.  And, certainly, he would be disapproving of the time limits established by a minority of states on the surviving spouse’s award.  (In several states, fatal claim benefits are not, as in Pennsylvania, payable for the duration but, instead, up to periods of 400, 500 or 700 weeks.)

So imbued is the book with the author’s sense of injustice that he even objects to criminal laws that create a harsh penalty on criminals for the murder of police, correctional officers, and firefighters who are killed in the midst of their work.  He complains, “legally mandating that the lives of those working in certain professions are afforded additional protections than lives deemed by the state to be less worthy of protection and hence less valuable directly challenges the notion that justice is blind.”  Here, the author sets forth a critique likely counterintuitive to most of us.

Friedman’s discussion of cost-benefit analysis, as undertaken by both government agencies and private industry, is highly educational.  He explains the various ways that the Value of a Statistical Life is theorized and then generated.  And, to each he applies a critique.

Of special interest to workers’ compensation professionals is his negative assessment of the “wage-based method of estimating the Value of a Statistical Life.”  Here, the author treats the economic theory, voiced so often, that workers choosing jobs take into account dangers of the same and demand a higher wage in the face of excess peril.  The author explains, “This theory assumes that job seekers had options regarding what jobs they would take; that they know the risk of death associated with each job and the corresponding incremental risk of different job options; and that they demand to be paid higher for jobs that had more risk.  The ratio of the incrementally higher amount being paid for a risky job to the incremental risk is used to estimate the Value of a Statistical Life.”

Friedman explains that numerous Value of a Statistical Life estimates have been developed based upon this economic theory.  And, he adds, “while there was a wide range of values estimated in different studies, cost-benefit analysts settled on the value of $6.1 million per life in 2000 using U.S.-based studies.”

The author mounts a fierce critique of the “false assumptions” found in this economic theory and the $6.1 million dollar value as well.  He complains:

Potential employees often don’t have options but rather have to take whichever job is available to them.  Potential employees often have little or no knowledge about the incremental risk associated with different jobs.  Even if the employee has an accurate directional sense of the risk of acute injury and death, they often don’t know the exact risk.  Moreover, employees don’t take input information about precise estimates of these incremental risks, infer the missing data from nonacute risks, and then analyze the data to determine what is the necessary incremental compensation.  Simply put, potential employees lack the information needed to make the informed decision that the calculation assumes they are making, and often they also lack choice in employment options or salary negotiation opportunities.

They often don’t even know the salary potential of jobs or have effective negotiating leverage, as evidenced by the fact that union organized labor is higher paid and thus has a higher Value of a Statistical Life estimate than nonunion labor.

Friedman, calling the purported higher wage that risky work demands as “risk premium,” refines his critique later in the book: “What,” in this regard, “is the fair amount that someone should receive to take on extra risk?”

Looking at the compensation patterns of risky and non-risky jobs is a starting point, but that does not necessarily give an accurate estimate of the risk premium.  Factors that can work against there being an accurate risk premium, if any risk premium is being paid at all, are numerous.  These factors include the asymmetry of information and power; the fact that a job’s risk are often unknown to the employee; the absence of choices afforded to those who often end up working risky jobs, such as illegal immigrants and people with language barriers; and the fact that people working in risky jobs often are less risk averse, have few or no job options, and have limited capacity for negotiation.

As to the former, Friedman notes (no surprise), that “because the [life insurance] industry is competitive, the most successful life insurance companies are those that build accurate models of life expectancies.”  He further explains, “specifically, life insurance companies want to build very accurate survival curves that predict the probability that you will be alive one, two, three, or twenty years from now.  These probabilities are multiplied by the premiums and payouts to develop a prediction of the typical cash flow of an insurance policy for someone like you….”

Of course, individuals, on their own, on occasion undertake the valuation of life.  In one of his final chapters, Friedman undertakes an analysis of the delicate issue of how a parent or parents may decide whether to have an unborn baby proceed to term or, instead, be subject to abortion.  Complicating that calculation are modern tests which reveal the gender of a baby – and which may lead some parents to decide whether or not the baby is to be born.

This book, written with a minimal amount of jargon, is educational even to the sophisticated lawyer. Workers’ compensation attorneys and other professionals in the field will be enlightened and enriched by a careful study of the book.