Honorable John T. Cornett, Jr. is a native of Petersburg, Virginia.  He was born into a blue-collar family and was the first in his family to attend college. He earned a Bachelor of Arts in Political Science from Virginia Polytechnic Institute and State University (Virginia Tech), and his law degree from the T. C. Williams School of Law at the University of Richmond.

For over twenty years John has represented clients regarding workers’ compensation issues.  He has represented injured workers, employers, insurance carriers and medical providers before the Virginia Workers’ Compensation Commission and the Court of Appeals of Virginia. 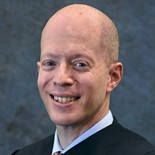 Honorable Josh Wulf is a graduate of Duke University and William and Mary Law School. Prior to joining the Commission, he spent 24 years representing local businesses, global corporations, and insurance companies in workers’ compensation matters. During his time in private practice he opened, expanded, and led the Northern Virginia office of an established firm.